This tale of the chickens’ demise started out innocently enough. I had no idea that I was setting myself up for a disaster of massive proportions. 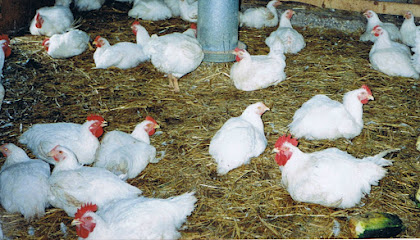 r of nine children on a hobby farm. This time problems began when the butcher phoned us to change our slaughtering dasame weekend as a conference that my husband was attending.

Putting on a positive front, I assured Michael that since our oldest son was old enough to drive to the neighbour’s large freezers, we could probably manage the day without him. Just to make sure that the day would go ahead smoothly, we enlisted the help of one of my son’s friends, as well as another mother to help run the household and occupy the youngest children. David and the oldest girls agreed to help me bag, weigh and record the weight of each chicken. Three days would be taken up with, slaughtering, freezing, cleaning-up and selling chickens to friends and relatives who would drive out to our farm. With my parents coming by the following Tuesday or Wednesday next week, my trustworthy sister-in-law offered to help attack housework. To top it all, off Mara, my second oldest daughter had planned a party for her sixteenth birthday that same Saturday. Any worries I had about a rowdy group of teenagers swarming all over our little farm were alleviated when Karen, my sister-in-law, offered to stay on after supper to chaperon the party in Michael’s absence. I would be free to look after bedtime rituals with the little ones. Everything seemed to fall into place.

I was confidant that I had everything under control. Ha!
It had been a hard day, partly because it was very hot for mid September. Michael was usually the one to deal with the butchers every year. Though I usually can disarm most people and make them feel comfortable, this family completely defeated any offers of friendship. They were a rough, burly, dour family who hardly spoke and gave the impression that they had emerged from Canada’s back woods country once a year to kill chickens. They all looked hung over, smoked so much that a blue haze filled the car along with country and western music. Their vehicle also displayed a huge set of fluffy dice dangling from the rear view mirror.
I tentatively went up to the car which held the female division of the team, to ask them if they wanted tea.I was greeted with a roar of laughter as they toasted me with what smelled like coffee laced with whiskey. They were a scary lot. This is not an exaggeration. Actually, I would say that this assessment is kind!
The butchers had finally finished their part of the job and left, although it was not done as well as when Michael was here. David and I were picking up chicken heads and feet, while Matthew and Rob raked up bags and bags of feathers and innards. Mara was frantically cleaning blood from the lane, barn ,tables, wheel barrows etc. before her friends arrived and Cathy was rounding up her three children to go home. The kids were gathering wood for the bonfire that night and Karen was helping one of my older daughters start dinner. Then I saw a car with a car top carrier!
My heart stopped.
I called out,
” Oh no! I hope that car passes by and keeps going.”
We were just ready to celebrate when the car did a U-turn and slowly crept up the lane way. I strained my eyes looking for the license plate pleading silently that it was not my parents.
No such luck.My parents had arrived five days early, after the directions I had given them.
“Take the Trans-Canadian highway for over 3,000 km. across British Columbia, Alberta, Saskatchewan and Ontario. Then just after Arnprior, turn left at Antrim and we are 3.1 km. on the left.”
Grandma and Grandpa entered an alien world. My mother especially is not used to crowds of people, never mind strangers. To top it off, the music was LOUD and there were the throngs of excited teenage girls coming through the house to use the washroom. Someone brought beer and Mara almost intoxicated her grandmother with her breath.
Oh yes; Michael phoned the house to see how butchering day went only to have the phone answered by a friendly teenage girl who invited him to the party!
It actually took only a week or two for me to regain my sense of humour. I told a friend this story with my usual sense of the dramatic.
Still laughing, with tears in her eyes she said,
“