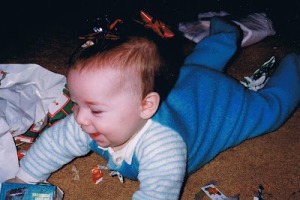 What was my reaction to this overwhelming scene? I leaned against the kitchen wall and slid down till I sat on the floor with my legs sticking straight out.

One evening, when I had only four children, everyone was finally asleep and Michael had gone out to play hockey with his house league team.

“Ah”, I thought to myself, “A chance to put my feet up and enjoy a bit of reading”.

A couple of minutes into my free time, I heard that plaintive little cry that always causes a mother to jump up into the air and rush to the rescue. This time it was five-year old Melissa who woke up vomiting everywhere. It covered her pillow, p.j.s, sheets, comforter and was in her hair, all over her face and soaked right through her top. Poor Melissa reeked almost as badly as her room and she was crying.

I gently washed her face and body with a warm, wet face cloth and lots of sweet-smelling soap, washed her hair over the edge of the tub, quickly dried it, put on clean pyjamas and tucked her into my clean bed with a hot bean bag and lots of hugs. Just a side note: I had just put clean sheets on all the beds that very morning.

I had no sooner stripped Melissa’s bed, rinsed out all the bedding, put in a load of wash and remade her bed when she vomited all over my pillow, sheets, comforter, her pyjamas and in her hair. I cleaned her up a second time, tucked her in her now fresh bed, stripped my bed and piled up the dirty bedding in the basement.

But guess what transpired in the next 20 minutes? You’ve probably caught on to how this special, forever seared in my brain night was playing out.The entire procedure happened all over again. Finally my little girl was sleeping peacefully, in her own bed, made up with blankets I had unearthed from a box in the basement.

I tip-toed into the kitchen to deal with nine-month old David who had woken up during all this activity. I had corralled him in part of the child proof kitchen only to discover that he had pulled out three litres of oil, tipped it over and spilt all of it onto the kitchen floor. Now, David was gleefully swimming and splashing on his tummy in a pool of oil which soaked every inch of his clothes, face, body and hair.

What was my reaction to this overwhelming scene? I leaned against the kitchen wall and slid down till I sat on the floor with my legs sticking straight out. Then I giggled. Then I laughed and laughed and laughed until my stomach ached and tears were streaming down my face.

I managed to pull myself together, somehow, to begin the arduous task of cleaning up this slippery but happy nine-month old. After giving him his second bath that evening and stuffing his ruined clothes in the garbage, I balanced him on my hip as I spooned up some of the oil.

Finally at nearly eleven that night, I had washed the floor and David was asleep. Michael came through the kitchen carrying his heavy hockey bag and He nearly broke his neck slipping on that kitchen floor.

My reaction? I threw up my hands and laughed, till I almost cried.

7 thoughts on “Laughter Turned a Tragedy Into A Comedy”