This piece is  a interpretation of the Deposition done by Fra Bartolomeo. There were a few changes Ann made…she  added the crown of thorns down in the bottom left, and changed the face of the Virgin Mary a little. The original is in the Uffizi Galleries in Florence, Italy.

Ann became Catholic in 1999 and soon after that was exposed to the iconographic tradition in the Catholic and Orthodox churches. After doing some private study with some iconographers with the Prosopon School which teaches a traditional Russian style, Ann decided to embark on an experiment to create iconographic art that is particularly suited for the Western eye.  She’s been working on that project specifically for the past 7 or 8 years, and doesn’t ever think she will finish.

This pair of hangings was done for the 2011 Anniversary of Church of the Incarnation in Charlottesville, VA. These are done in the style of German stained glass, and so the forms are completely realistic with the symbolism of the Annunciation folded in. 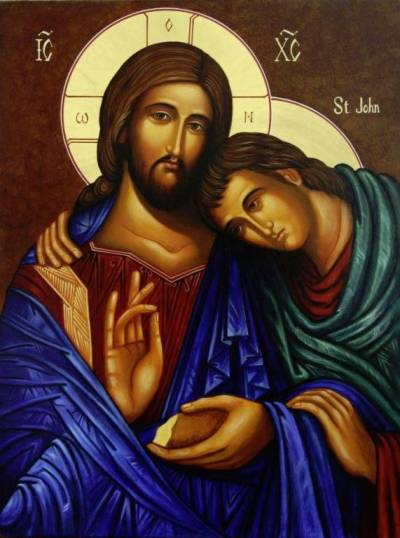 Last Supper – John the Beloved and Christ This piece represents that moment in the Last Supper, when it says that John reclined on the bosom of Christ to ask him who would betray him. (John 13:21-26).  Jesus is holding the bread from which he will take a morsel and dip it before giving it to Judas.

This canvas is an exploration of the image on the Shroud of Turin.  The entire image on the shroud is ‘negative’ in that the contours of the face appear correct when looking at a negative of a photo taken of the image.  There’s constant ongoing research to figure out how the image was made, to prove it fake or genuine, but this piece was done more as the first one – as an object for contemplation.  Here Christ has passed through death and is entering the realm of the glorified body; still physically real (not a ghost, He ate fish with the disciples).   So this is to reveal what the shroud covering His face was still hiding.  This is intended to be a piece where you just sit and let Him gaze at you.

The icon of the Crucifixion depicts the people closest to Christ present at the cross. To the left is the Theotokos along with other women who ministered to Christ, such as Mary of Clopas. On the right is the beloved disciple John and the Roman Soldier is Saint Longinus, who said “In truth this man was son of God.” At the base of the cross is Mary Magdalene with the skull in the hollow of the rock representing Adam’s skull – traditionally the Crucifixion was over the grave of Adam. The sun is dark and the moon red per Acts 2:19-22.