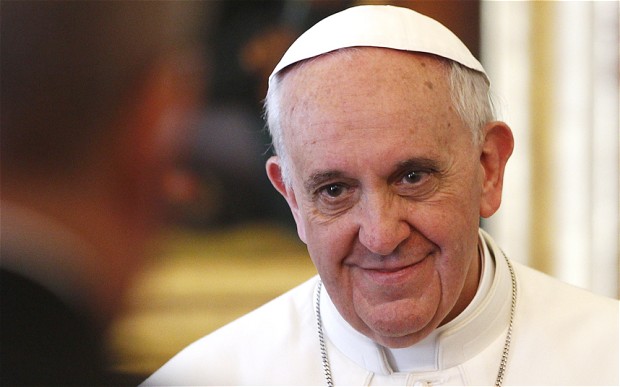 Seven differences that Pope Francis has made  in one public  appearance are in keeping with this man’s lifestyle. This image is also a visual symbol for this pope’s message to the world. Pope Francis has a special vocation to witness to social issues. this is not to demean Pope Benedict , who taught with deep wisdom; his focus and charism were simply different, not better or worse than Pope Francis.

1. Changed the golden throne to a wooden chair which is something more appropriate for the disciple of a carpenter.

2. Did not want the gold-embroidered red stole nor the red chasuble, which symbolizes the heir of the Roman Empire .
3. Uses same old black shoes, not the classic red.
4. Uses a metal cross, not one of rubies and diamonds.
5. His Papal ring is silver,  not gold.6. Uses the same black pants under the white cassock, to remind himself that he is simply  another priest.
7. Removed the red carpet.

3 thoughts on “Pope Francis’s Witness Symbolized in an Image”