Why would the Church celebrate the death of a martyr the day after Christmas?Remember the old English carol Good King Wenceslaus?

St. Stephen’s charity is the reason for the songs and customs which have become the traditional way of celebrating his feast. The old English carol Good King Wenceslaus celebrates how King Wenceslaus went out on St. Stephen’s day to bring food and firewood to the poor.  The blood of his freezing feet covered the snow: “Heat was in the very sod which the saint had printed.” The good king knew that whatever he did to the least of his subjects he did for Christ in honor of the first martyr. In Yorkshire, England, the people made large goose pies  and distributed them to the poor. The day after Christmas the feast was known as Boxing Day, since masters filled earthen banks or boxes of their apprentices  with money. This was the first form of the piggy bank. 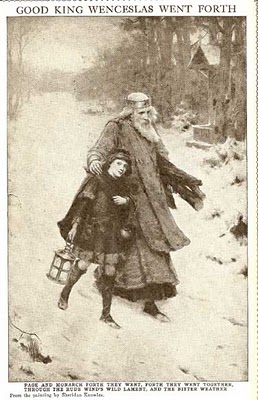 Advent brought God to man through the Incarnation of the Word, so the twelve days between Christmas and the Epiphany  brings man to God.. There is no greater love for the newborn King than to lay down one’s life for Him.  Stephen’s name means “crown,”; a deacon, he was the first Christian to be martyred. The apostles needed helpers to look after the care of the widows and the poor. So they ordained seven deacons, and Stephen is the most famous of these.

God worked many miracles through St. Stephen, speaking with such power  that many of his hearers became followers of Jesus. The enemies of the Church of Jesus were furious to see how successful Stephen was.  They could not answer his wise argument, so they convinced other men to lie, saying that he had spoken  against God. St. Stephen faced that great assembly of enemies without fear. In fact, Scripture says that his face glowed like the face of an angel.

The saint spoke about Jesus, showing that He is the Savior,God had promised to send. He reprimanded his enemies for not having believed in Jesus. At that, they rose up in great anger ; Stephen looked up to Heaven, revealing a vision of heaven opening up with Jesus standing at the right hand of God. His hearers plugged their ears, refusing to listen. Then dragged Stephen outside the city of Jerusalem and stoned him to death. The saint prayed:

Then he fell to his knees and begged God not to punish his enemies for killing him.

4 thoughts on “Why Boxing Day is the Feast of the Martyr St. Stephen”