Luke 7:47 “For this reason I say to you, her sins, which are many, have been forgiven, for she loved much; but he who is forgiven little, loves little

Mary Magdalen was so called either from Magdala near Tiberias, on the west shore of Galilee, or from a Talmudic expression meaning “curling women’s hair,”  which refers to an adulteress.

In the New Testament she is mentioned among the women who accompanied Christ and ministered to Him (Luke 8:2-3), where it is also said that seven devils had been cast out of her (Mark 16:9). She is next named as standing at the foot of the cross (Mark 15:40;Matthew 27:56; John 19:25; Luke 23:49). She saw Christ laid in the tomb, and she was the first recorded witness of the Resurrection. Most of the Latins hold that these three were one and the same. 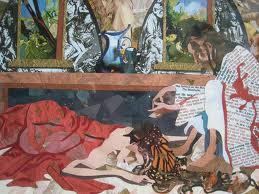 The “sinner” comes early in the ministry to seek for pardon; she is described immediately afterwards as Mary Magdalen “out of whom seven devils were gone forth”; shortly after, we find her “sitting at the Lord’s feet and hearing His words.”

At a later period Mary and Martha turn to “the Christ, the Son of the Living God”, and He restores to them their brother Lazarus; a short time afterwards they make Him a supper and Mary once more repeats the act she had performed when a penitent.

At the Passion she stands near by; she sees Him laid in the tomb; and she is the first witness of His Resu

rrection–excepting always His Mother, to whom He must needs have appeared first, though the New Testament is silent on this point. In our view, then, there were two anointings of Christ’s feet–it should surely be no difficulty that St. Matthew and St. Mark speak of His head–the first (Luke 7) took place at a comparatively early date; the second, two days before the last Passover. But it was one and the 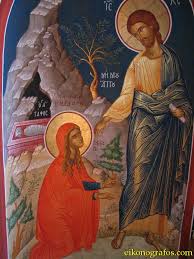 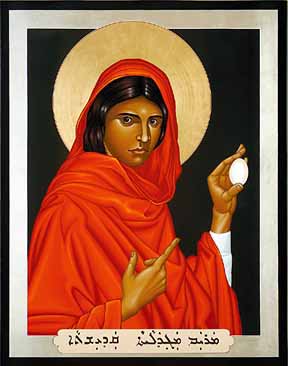 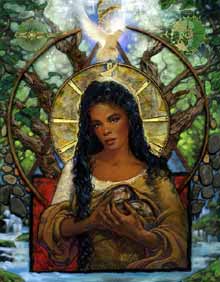 s pious act on each occasion.

2 thoughts on “St. Mary Magdalen in Art: She Loved Much”