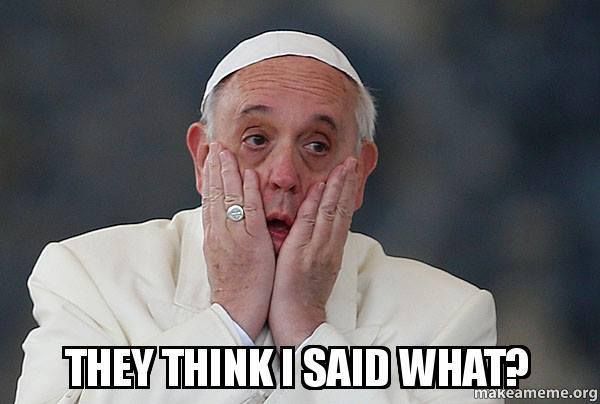 I have been waiting for comments with fear and trepidation after writing an article on Pope Francis for CatholicStand,  Finger-pointing: The “Sins” of Pope Francis .  Both the pope and I were verbally berated on another article written last month on a Wednesday Papal Address. These critics seem poised, ready to pounce on any hint of his supposed sin against tradition. Pope Francis’ detractors condemn him as a modernist heretic who is selling out to secular opinion by refusing to stand up for traditional Roman Catholic Church teachings.

However , this time, commentators, on the whole, have restored my faith in the Body of Christ. I  realized that I must not panic in the face of detractors, lies, hate or even evil.  Christians trust more in the power of God to bring about His will than in the power of the evil one to deceive. The Church has always understood that God can even bring good out of sin, just like Adam’s sin is called a happy fault.

I simply must share some of the warmth and wisdom shared by commentators. If you wish to read them all, just click on the link above.

Amen sister! You nailed it! You really did. I could not agree more. Some Catholics are so critical of Pope Francis they sound like some Protestants I know. I still say Pope Francis is being led by the Holy Spirit and he is a man of tremendous compassion. I thank God for him! I believe he will win many to the faith, and I believe I am one of them

We  must not lose sight of one fact, which is that Francis’ Catholic critics are a tiny minority. Yes, they are vocal, and we should never ignore them because they are our brethren and we should listen with open hearts. But, according to the March Pew Poll, only 2% of Catholics think Francis is a change for the worse. That month, another poll showed that only 1% of Catholics view Francis unfavorably. I repeat: I do not mean to belittle these Catholic voices, but we must put them in perspective that they do not represent a major current in the Church (though they would undoubtedly argue that they count for more because they represent more faithful Catholics, the ones who go to church more regularly, etc.–I am only speaking about the cold hard numbers).

Pope Francis is the right person for the times we live in. As he has told us, we can no longer leave the 99 to go after the lost sheep, in today’s times we must leave the 1 and go after the 99. It’s that critical! The Holy Spirit has done a great job in giving us just the right inclusive, humble, shepherd to lead the Catholic Church. Faithful Catholics would do well by following his pastoral lead and not get hung up on the rule book.

Pope Francis is the best thing that has happened to the Catholic Church since I was born in the mid-1950s. He’s speaking the truth! He’s leading his life in the true tradition of a Christian, after the example of Jesus. The Catholic Church over the centuries became so big and powerful, it caused great corruption. Now Pope Francis is working to clean it up. He’s up against powerful forces. I fear for his life. I pray he can clean up the Vatican curia, Vatican bank, cut the mafia out, rid the Church of gay pedophile priests and pastors & Bishops who facilitated abuse, allow priests to marry again (like they were up to 1000). Bring the Church back to Jesus!

Pope Francis is following Jesus, not just worshiping him. Worshipping Jesus is easy, but following Jesus our good Shepherded like Pope Francis is the tough challenge which these ‘Catholics’ who do not like. They just want to pitch couple of tents at the mount tabor and wish to stay there as St. Peter once wished. And you know what Jesus told him looking at the disciples, ” get behind me satan”
That is all we can tell these people who are critiquing Pope Francis !

It is truly sad that when politically conservative commentators and pundits like Bill O’Reilly, Sean Hannity, Stuart Varney, and Rush Limbaugh (two of which are Catholic) attacked our Holy Father as being socialist and marxist, the Catholic League, which says that it defends the church, issued no condemnation on these denunciations. (it should be noted that they go after people like Bill Maher regularly for similar slanders) In fact, Bill Donohue trumpeted an interview that he gave to Rush Limbuagh, on of the Pope’s accusers. At the same time, he, Donohue, condemned a group which calls itself Catholic, that while at times is at odds with the church, nonetheless support Pope Francis. In his condemnation he called them a ‘bogus group’.

A heresy has infected the Catholic Church in the USA, and that is one in which a person is of a particular political leaning, be it left or right, and a Catholic second. Both sides are guilty of this. It is time for us as Catholics to stand up and defend our faith and our Pope before we defend our political parties

7 thoughts on “Pope Francis Supported by 99% of Catholics: Comments on Article Are Heartwarming”