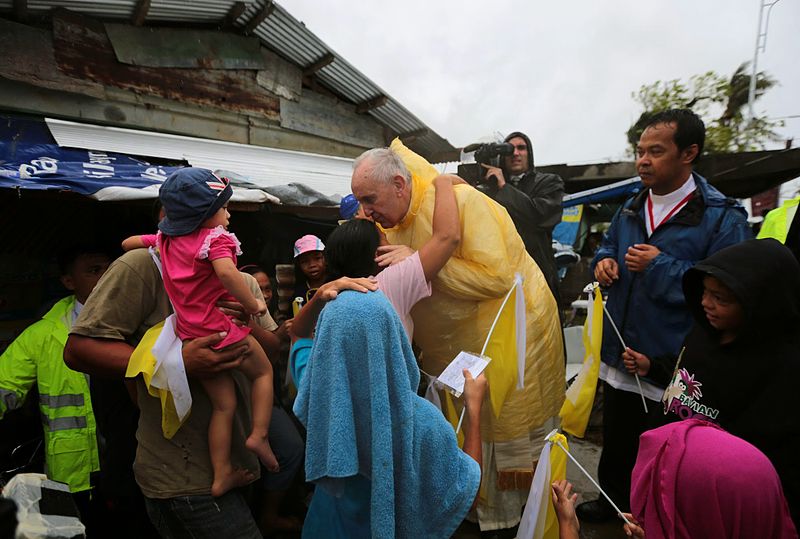 On June 10th, the Pope’s Wednesday general audience continued his catecheses on the family, focusing on the theme of sickness and suffering. Man experiences his own fragility primarily in the family, first as a child and, then, as an elderly person. While family sickness presents obvious challenges, it can also be a source of quiet strength and deepening of faith.

Pope Francis stresses that we must “educate children as little ones to solidarity in the time of sickness”:

The sickness of persons we love is endured with “more” suffering and anguish. It is love that makes us feel this “more.” So often it is more difficult for a father and a mother to endure the sickness of a son, of a daughter than their own. The family, we can say, has always been the closest “hospital.” Even today, in many parts of the world, the hospital is a privilege for a few, and it is often far away. It is the mother, the father, brothers, sisters and grandparents that guarantee care and help to heal.

Contrary to contemporary society which tends to recoil from sickness, the pope understands the “weakness and suffering of loved ones can be, for our children and our grandchildren, a school of life.” An “education that lacks sensitivity for human sickness hardens the heart.” Obviously, Catholics must learn not to shelter our children from suffering because it is an integral part of our faith. Cardinal Gianfranco Ravasi shed light on the pope’s teaching when he said there is “an unavoidable spiritual dimension to illness for us Christians” because “ours is a religion of the flesh.”

During this catechesis, the pope turned to the Gospels, pointing to Jesus who did not avoid suffering but rather embraced and cared for the sick. Christ “presents himself publicly as one who fights against sickness and who has come to cure man of every ill: ills of the spirit and of the body.” The Pope points to the scene in the Gospel of Mark:

“that evening at sundown they brought to him all who were sick or oppressed by demons” – is “truly moving … Jesus never withdrew from their care, He never passed them by, He never turned away. And when a father or a mother, or even simply friends brought an invalid before Him, for Him to touch and heal, He wasted no time; healing came before the law, even sacred laws such as rest on the Sabbath.”

Jesus healed all who reached out to Him in faith and He sent His disciples out to preach, giving them the power to heal just as He did. “See God’s glory! See the task of the Church! To help the sick, not to get lost in chatter, but to help always, to console, to relieve, to be close to the sick; this is the task.”

Of course, today all sickness of the flesh is not healed, but Pope Francis points out that prayer heals and strengthens the spirit of those who are ill as well as family members. Emmanuel Mounier, the French philosopher (1905-1950), illustrates the pope’s teaching. He had an infant daughter who was hospitalized with a serious brain condition. “What sense would all this make if our baby was only a diseased flesh, a piece of life in pain, and not a small white wafer that is beyond us all, an infinity of mystery and love which would dazzle us were we to see it face-to-face?” he asked. We are spirit as well as flesh. With faith and prayer, illness can bring us closer to each other and God, healing our spirits.

“The Church invites us to continual prayer for our dear ones who are sick, and prayer for them must never be lacking. Rather, we must pray more, both personally and as a community.…Faced with sickness, difficulties can also arise in the family as a result of human weakness. But in general illness strengthens family bonds. And I think of how important it is to educate children, starting from infancy, on the importance of solidarity in times of sickness. An education that shelters them from sensitivity to human sickness hardens the heart and anaesthetises the young to the suffering of others, rendering them incapable of facing up to suffering and living the experience of limits.”

Catholic families must learn to follow Christ’s attitude, forming children who can face up to suffering.

“The weakness and suffering of our most loved ones … can be … a school of life … and especially when illness is accompanied by prayer and the fraternal, affectionate closeness of families. The Christian community is well aware that the family, during the trials of sickness, must not be left alone. … This Christian closeness of family to family, is a true treasure for a parish: a treasure of wisdom, that helps families in difficult moments and enables them to understand the Kingdom of God more clearly than through words.”

6 thoughts on “Weakness and Suffering: The School of Life For Our Children”