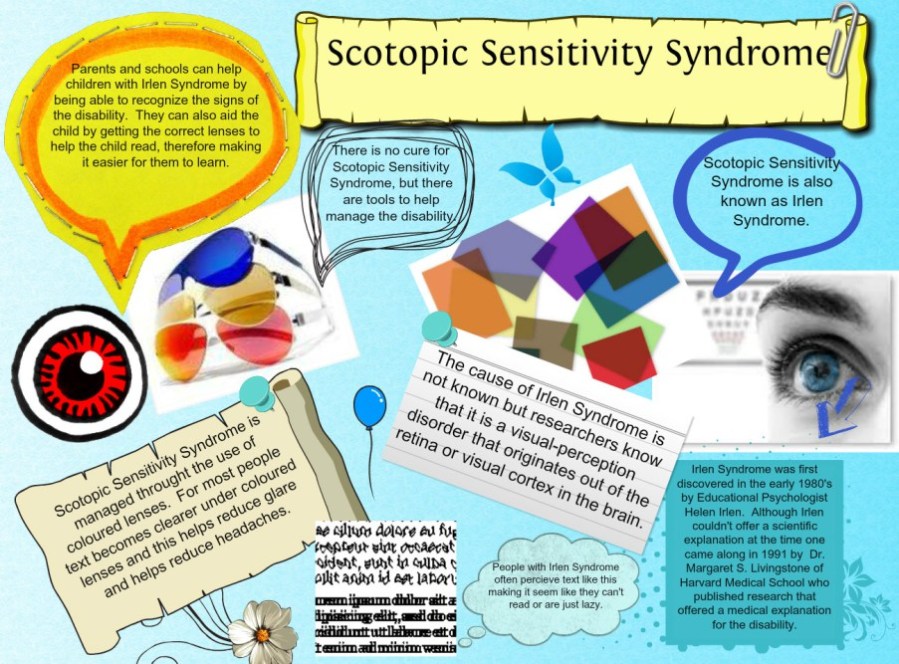 God heals His people through any and all avenues. One of the most memorable miracles in my life might seem to be mere coincidence, but I know  God was at work.  I usually post this article on Irlen Syndrome once a year on my “other” blog.  However, I want to give thanks to God today by posting on my Catholic blog.

One son and one daughter have Irlen Syndrome or SSS (Scotopic Sensitivity Syndrome). My son could have grown up to be a functionally illiterate man if I had not stumbled on a misplaced book.  Now he is an avid reader in his twenties. Schools in Canada do not screen for this disability. I am adamant the public become aware of a reading disability that affects 11-13% of the population and is usually never detected.

Quite by accident, we discovered why our 11-year-old son could not read

I was gathering books to return to friends one day when the book “Reading by Colors” by Carol Irlen caught my eye. As I was skimming through it, 11-year-old Anthony looked over my shoulder and said in a surprised voice, “Gee, those words look nice.”

I turned to him and said, “What do you mean NICE?”

Anthony explained, “The words are flat with the page and they’re not moving.”

I sputtered, “What do you mean not moving?”

Anthony shrugged his shoulders and said, “You know, the letters aren’t shaking and they’re not high off the page.” 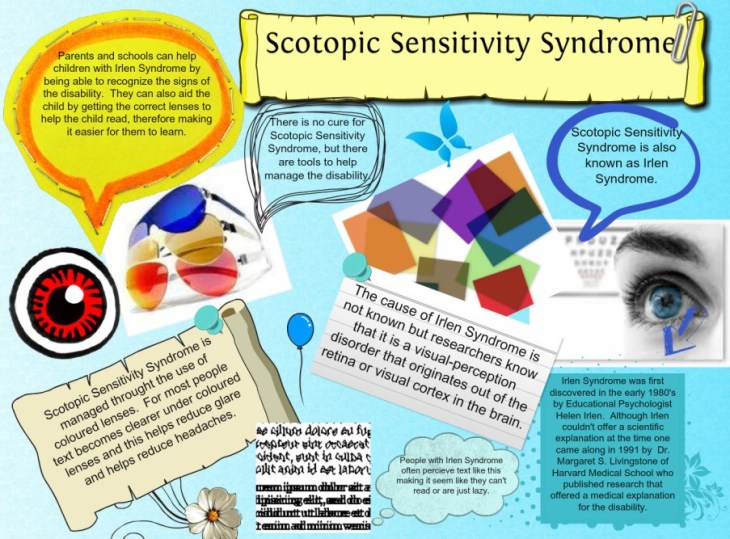 This particular page was grey with blue letters. I quickly turned the page to a white one with black letters. Anthony wrinkled his forehead and described what he saw when he looked at the printed page.

Everything clicked into place as I did research into Irlen Syndrome or SSS (Scotopic Sensitivity Syndrome); I realized that Anthony had every symptom. SSS is a learning disability that causes difficulties with reading as well as encoding and decoding verbal information. Unbelievably many eye specialists refuse to acknowledge Irlen syndrome, probably because a normal educator, teaching illiterate adults in California discovered the problem and the solution, not a scientist.

We struggled for years to teach our intelligent son how to read. It was sheer agony. Anthony couldn’t sit still, he’d lose his place, forget what he had read 30 seconds after he had read it. After ten minutes of struggling, he would start rubbing his forehead, complain that his head hurt and he felt sick. This kid had perfect eyesight, was smart as a whip, especially in Math but he could barely read.

No one in the school system knew anything about this handicap. I finally a found a private screener in Ottawa, Adel Francis. She discovered that Anthony had not one but five different distortions, each one corrected with a different coloured lens. Within two hours of testing, after Adele had pointed out a few complicated words, Anthony read smoothly and flawlessly at a grade NINE level. We came to tears because we had pushed and badgered our son for years, when he just couldn’t see the way most other people do.

When we learn that 11% to 13% of people have SSS, we were appalled. So much potential wasted, so many people frustrated, unfilled, feeling dumb with many ending up in jail.

Everything changed rapidly once Anthony started to wear his miracle lenses. The first night we read together after he started wearing his dark blue, grey glasses, Anthony moved the page close to his face and then back again. He then turned to me with a puzzled look on his face and asked, “Getting has two t’s in it??!”

One night after supper, when the younger children had left the table to play, my oldest daughter laughed and said,

“Hey, I just realized that we don’t have to send Anthony away if we want to discuss an adult topic; we’ll just take off his glass!”

We all laughed of course.

Then there was the time a friend tried to cut Anthony’s hair. He couldn’t seem to stop squirming. One of my daughter’s, Rachel, suggested, “Why don’t you try putting on his glasses?”

Anthony put them on and he sat as still as a stone statue.

“Oh my god, I don’t believe it,” my friend yelled, “Everyone come see this. Okay, Anthony, take your glasses off and then put them on when I tell you.”

The difference was so dramatic and everyone’s reaction was so funny that even Anthony started to laugh.

connecting with Theology is a Verb and Reconciled to You