Although most respectable members of our parishes try to look healthy and content in public, mental illness is as common and invisible among the faithful as it is in secular circles. I would wager that mental health issues are especially prevalent among the devout who are serious about their inner life; when people tackle deep inner issues which prevent God from working in their lives, their inner equilibrium is upset by stress, anxiety and depression. This probably explains why most saints experienced profound periods of depression when they finally looked beneath their pious actions to face the reality of their own ingrained sin and subsequent need for inner purification.

If the topic of how and why Catholics experience mental illness seems completely irrelevant to you, consider this meme posted on my fridge for years:

One in four people suffer from mental illness.

If they all seem fine,

I often doubled over laughing after a guest to our house read this “joke” then looked uncomfortable afterwards. Mental illness is still a secret taboo to be hidden from friends and co-workers. Those who suffer are reluctant to reveal their struggles.

Mental Illness Is Not a Sign of  a Weak Character

Most make an appointment every year with their G.P. to check out their physical health and reluctantly arrange for a dental check up but why don’t people also undergo a routine mental health check up? Some people might laugh off the implication there is anything wrong with how their brains function. Others might nervously skim the rest of this article, fearing to admit they have problems. However, this question is far from ridiculous. Have you taken a good look around lately? What do you see and

Modern society is stressful; people are anxious about the economy and job security. They have problems sleeping; many self-medicate with alcohol, drugs and cigarettes to help ‘take the edge off’. More and more sick days are the result of depression and other mental health issues. However, it never enters most people’s minds to seek professional help until they are in a crisis because there still is a stigma attached to mental illness.

It is especially important for Catholics to understand the causes of mental illness, instead of judging those who suffer as lazy or at fault for some reason or other. It is even worse when believers deny their own need for help. When people cannot understand these unseen illnesses, they simply fall back on age-old admonishments,

Pull yourself up by your bootstraps.

He needs a kick in the pants.

What’s wrong with you, anyway?

You seem fine to me!

No one actually believes people are to blame if they need eyeglasses to read or insulin to fight diabetes but they still heap abuse on people with depression or anxiety as if these diseases were signs of a weak character or a lack of faith. Triggers for mental illness can be as simple as increased stress or a lack of sleep to a more serious reaction to a traumatic event such as war or abuse, anything which throws off the chemical balance in the brain. Some people just need medication to balance their serotonin levels to heal mental illness just like some people need insulin.

The Sins of Our Ancestors Can Also Trigger Mental Illness

(Fr. Robert Stackpole, STD, director of the John Paul II Institute of Divine Mercy, has written an excellent explanation for how ou ancestors affect us. See The Sins of Our Ancestors)

Babies do not simply inherit physical characteristics from their ancestor but personalities and even blessings and curses which have been passed down through the generations. Although my children came from the heart of God, with a Divine spark in their souls, they are human beings with faults, weaknesses and even sin inherited from their ancestors. 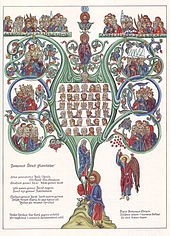 rs 14:18 ‘The Lord  . . . will by no means clear the guilty, visiting the iniquity of the fathers on the children, to the third and the fourth generation.’

This is not simply an Old Testament teaching. With the help of a spiritual director, I have discovered generational curses deep in my soul, hidden from me till  I began the inner journey.

Romans 5:12  Therefore, just as sin came into the world through one man, and death through sin, and so death spread to all men because all sinned—

As the Catechism of the Catholic Church explains:

404 How did the sin of Adam become the sin of all his descendants? The whole human race is in Adam “as one body of one man”.293 By this “unity of the human race” all men are implicated in Adam’s sin, as all are implicated in Christ’s justice. Still, the transmission of original sin is a mystery that we cannot fully understand. But we do know by Revelation that Adam had received original holiness and justice not for himself alone, but for all human nature. By yielding to the tempter, Adam and Eve committed a personal sin, but this sin affected the human nature that they would then transmit in a fallen state.294 It is a sin which will be transmitted by propagation to all mankind, that is, by the transmission of a human nature deprived of original holiness and justice. And that is why original sin is called “sin” only in an analogical sense: it is a sin “contracted” and not “committed” – a state and not an act.

405 Although it is proper to each individual,295 original sin does not have the character of a personal fault in any of Adam’s descendants. It is a deprivation of original holiness and justice, but human nature has not been totally corrupted: it is wounded in the natural powers proper to it, subject to ignorance, suffering and the dominion of death, and inclined to sin – an inclination to evil that is called concupiscence”. Baptism, by imparting the life of Christ’s grace, erases original sin and turns a man back towards God, but the consequences for nature, weakened and inclined to evil, persist in man and summon him to spiritual battle.

When we grow closer to God and His light pierces deep into our being, generational sin is revealed in our core self. I discovered my paternal, grandmother had been pressing in on me, asking for prayer my entire life but it wasn’t until the light of Christ brought the issue to light that I began to experience mental anguish. I learned my pregnant grandmother died accidentally under extreme duress as a young mother while still in her twenties. Unfortunately, her husband was at war. This incident occurred in the 1940’s. She was denied a Christian burial in the Catholic Church and my father’s family left the Catholic Church when the war was over.

My own process of purification would have been even more confusing and even frightening than it was if I didn’t have an experienced spiritual director to show me how to confess and release each sin and oppressive spirit I had inherited from my grandmother to Christ:

Galatians 3:13  Christ redeemed us from the curse of the law by becoming a curse for us—for it is written, “Cursed is everyone who is hanged on a tree”—

James 5:16  Therefore, confess your sins to one another and pray for one another, that you may be healed. The prayer of a righteous person has great power as it is working.

Romans 8:2  For the law of the Spirit of life has set you free in Christ Jesus from the law of sin and death.

Even with guidance, the stress I experienced as I dealt with these inherited inner roots was barely tolerable.

Another relatively unknown cause of depression is unresolved grief. After two years of interceding for my grandmother’s soul in purgatory, I unknowingly still grieved for her death. Then a priest, the official exorcist of my diocese was led by God to give my grandmother absolution in the name of the Church because he sensed God telling him my grandmother’s soul was present in the room with us.  After my grandmother and I both received absolution, I was finally able to let her go. I knew that her soul flew joyfully into the arms of Christ. I was set free as well and felt depression lift.

Unresolved grief is a new concept in mental health circles. Secular doctors are beginning to realize it is the root cause of many

emotional problems.  In Catholic terminology, unresolved grief occurs when we cling to those who have died, refusing to surrender their souls to God or embrace our new relationship to them in the Mystical Body of Christ. Unresolved grief also haunts those who have had an abortion or suffered a miscarriage. Sometimes a miscarriage can even affect the remaining children in a family, even if they are unaware of the miscarriage at the time.

A friend, Catholic psychiatrist facilitates a group of faith-filled men and women who are learning how to grieve and release their forgotten ancestors to God, as well as miscarried and aborted souls in their family background. The change in these people, some who have been in therapy for decades, is miraculous. Unresolved grief was at the root of their mental illness.

It took years before I understood the spiritual and emotional weight I carried was blocking me from receiving God’s love. Yet, this spiritual block was not the result of my own sin or failings.What I felt was my deceased grandmother’s guilt, shame and sense of unforgiven sin in my own emotions. At times I identified with her feelings, thinking incorrectly that they were part of my own identity. It sounds bizarre but, unfortunately, my experience is common.

Tragically, few Catholics discover the root of their spiritual malaise because often it means seeking psychological help. We all have psychological impairments, generational cycles, selfish habits, pride, controlling and other errant behaviors. God offers His children the means to become free from sin, bad habits and mental illness through the Church, prayer, confession but also through therapy. Let’s bring mental illness out of the shadows of shame and into the Light of Christ.

4 thoughts on “Why Even Faithful Catholics Suffer From Mental Illness”