Perhaps there was a bit of heaven on earth on our hobby farm because natural enemies became friends. I like to think that the Holy Spirit flowed from our hearts into the land and swirled around, soaking into and transforming our animals’ personalities. In Isaiah, we are told a sign of the kingdom of God is when-

The wolf also shall dwell with the lamb, and the leopard shall lie down with the kid; and the calf and the young lion and the fatling together; and a little child shall lead them.-Isaiah 11:6

On our little farm,

The cat shall nurse the bunnies.

The goat shall weed the garden.

The horse shall dine in the kitchen.

A friend gave the kids a huge, white rabbit but she would leave tiny balls of poop on the floor. Unfortunately, baby Daniel crawled faster than I could sweep, so we moved the rabbit to the barn. A week later, when I moved a couch, I was shocked to find two baby bunnies under it.

We all panicked, and started running to find the mother. In the midst of all the turmoil our mother cat who had only one kitten in an upstairs closet, calmly walked over, laid down and let the rabbits nurse!

Strays were often dropped off at the end of our lane and some fleabags had to find shelter in our barn; I just couldn’t bring them into the house with babies crawling on the floor. One particular tomcat, Amos, was an old curmudgeon, with old battle scars and a bad temper. Finally, my husband had enough of this bully and he took him for a LONG car ride. Three days later, I opened the door and there sat Amos glaring at me. Michael came charging to the door in utter disbelief. I couldn’t stop laughing ; I think even Amos sensed the love of God permeating our land. All that day the kids and I sang a Fred Penner song,

The Cat Came Back

Old Mister Johnson had troubles of his own
He had a yellow cat which wouldn’t leave its home;
He tried and he tried to give the cat away,
He gave it to a man goin’ far, far away.

Michael especially enjoyed his intelligent pigs, believing that when animals felt loved, they related to people in extraordinary ways. It is true that when my husband scratched, behind his beloved pig’s ears, they actually fell asleep.

Then there was Daisy, our goat, and our pony Starlight who both tried to get into the house because they considered themselves part of the family. Actually, one huge, ancient horse named Moonlight did manage to get into the kitchen to visit for a while. I must admit that our farm animals repeatedly proved Michael’s theory about the power of love. 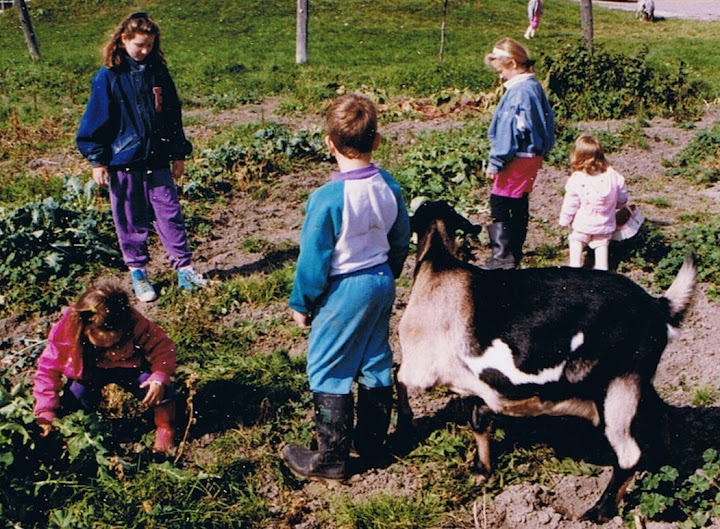 Daisy did not like living in the barn. Although she produced milk like any normal goat, she also wanted to relate to people because she was a socialized goat who had a charming personality. If she hadn’t seen anyone in a long time, she’d bleat until someone at least poked their head out of the door and talked to her. A couple of times a week we let Daisy follow us around in the garden. As long as she mainly ate weeds, we let her hang out with us.

Old Moonlight, the magnificent Arabian stallion, was a patient push over. This gentle giant would let toddlers run under him, a three-year-old child fed him carrots, two or three little people sit on him and little girls braid his mane and tail, all at the same time. Through the entire ordeal, Moonlight barely flinched. If he balked at all, I would look him in the eye, pray that peace and love soothe him and he immediately calmed down.

One afternoon, Moonlight was plaintively looking through the window. He looked so forlorn that all the kids begged to let him step in for a cuddle. I finally relented, inviting the huge animal to step into the kitchen to eat a carrot and soak in a bit of love for a while. Moonlight then passively followed us out afterwards.

Strangers did not think that another 0ne of our cats was not normal either. She always curled up beside our hunting dog because he was soft and warm. We thought nothing of this behaviour but it was a conundrum to local farmers. Several commented that they had never seen anything like it.

Mickey, a cat, always followed my husband around the barnyard as he did chores. One morning, Mickey was sitting on top of a fence post when a cow licked him right into the air, till he was standing only on his back feet. Afterwards, Mickey merely sat back down, shook himself and looked at my husband. After that incident, Micheal finally acknowledged the cat’s loyalty.

The cat shall nurse the bunnies.

The goat shall weed the garden.

The horse shall dine in the kitchen.

linking with theology is a verb

2 thoughts on “The Cat Shall Nurse the Bunnies”