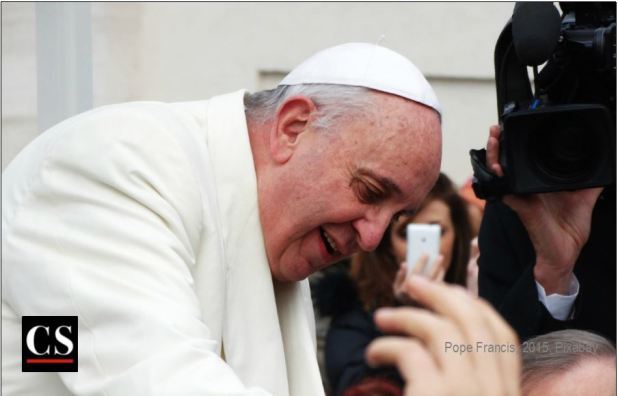 Every time Pope Francis speaks, the papers are filled with sensational headlines; he does not emphasize many of the popular, hot issues like abortion and homosexuality, issues which often simply serve to divide voters into an us and them mentality. When did these issues become the only issue that concerns the Church? Yet when the pope reminds us that our life in Christ is so much more, vocal advocates become extremely angry, denouncing the pope as the anti-pope.

Many of the uproars in English speaking countries are the result of consistently poor translations of the Pope’s speeches. For example, an incorrect translation into English of the original midterm report of the Synod on the Family may have spurred controversial interpretations of the document itself. Again when Pope Francis supposedly said God was not divine. He did NOT intend to say “God is not divine”.The culprit is most likely machine translations.

Why are there always such problems with the English translations.

And its not just BAD or incomplete translations, but that these translations ALWAYS tilt toward bad theology, progressivist language or interpretations. It’s almost like those responsible WANT to corrupt the faith – with either active or passively rotten translations.

It is interesting to note that Catholics in other nations do not react as negatively as English Catholics.

On the other hand, Pope Francis himself has said that God loves to shake us out of our comfort zone. The Lord of All has always used people to disturb the comfortable and to challenge others to live authentic, radical lives in and through His Spirit.

Because we really do not like to change, we end up resisting even God.  We like our comfort zone. We especially don’t like the rug ripped from under us and that approach is usually how God must snag our attention.

The Holy Spirit is not stagnant. He is not the God of the past, but God of the present,  alive, a dynamic powerhouse seeking to heal, transform and draw us ever closer to His heart.

This week I was wondering why so many Traditionalists are against Vatican II, labelling all the popes which came after as illegitimate and even heretics, especially Pope Francis. When I researched the question, an insightful homily popped up by Pope Francis from May 29, 2013. He called our resistance to change “being stubborn; this is called wanting to tame the Holy Spirit, this is called becoming fools and slow of heart.” The pope points to Traditionalists who resist changes, but even worse, to Modernists who twist the teachings of Vatican II to suit their own purposes, entrenching  Traditionalists even further.

Preaching on St. Stephen’s words before his martyrdom, Pope Francis addressed those who resist, twist, or ignore the impetus of the Second Vatican Council, which he described as “a beautiful work of the Holy Spirit”.  He applied St. Stephen’s words to those who resist change, “You stiff-necked people…you always resist the Holy Spirit.”  Again on the road to Emmaus, it was Christ who lamented, “O foolish men, and slow of heart to believe all that the prophets have spoken!”

“The followers of  Christ are slow to grasp and respond to the will of God, we fail to trust Christ completely, we do not wish to be moved by the Holy Spirit in new and surprising ways.“

He also rebuked the scribes and Pharisees of today, those who set themselves against the Holy Spirit’s work through the acts of the Council. Those who resist change impede authentic Catholic renewal by denying the validity or appropriateness of the Conciliar texts. Some Traditionalist seem to claim to be more Catholic than the pope or council, call the council illegitimate and stand on ceremony, fossilifying the Church’s pre-Vatican II culture in accordance with their own comfortable piety.

Perhaps many Americans do not like this South American because Catholics in America were taught that God loves capitalism. Pope Francis has made some pretty negative remarks about the freebooter capitalism that has flourished since the 1990s and that will make him very unpopular with the freebooters in the US. Some of his comments about greed, avarice, and capitalism have not even shown up in the mainstream media in Canada or the States.

I am baffled by all the negative reactions to Pope Francis. Personally I think that Pope Francis is just too joyful as he lives out his simple, his down-to-earth spirituality and humble solidarity with the poor and this irritates many traditionalists. Jesus and St. Francis of Assisi also irritated the Pharisees of their eras; those pure proponents of tradition dislike anyone who challenges their lifestyle. From the Catechism of the Catholic Church:

The Catholic wisdom of the people… provides reasons for joy and humor even in the midst of a very hard life. (CCC 1676)

The vocation of humanity is to show forth the image of God and to be transformed into the image of the Father’s only Son. This vocation takes a personal form since each of us is called to enter into the divine beatitude; it also concerns the human community as a whole. (CCC 1877)

“Teacher, which is the greatest commandment in the Law?”

Rather than attacking Pope Francis, lobbyists should ask themselves, why they are reacting so vehemently. Perhaps Pope Francis is convicting them of their own shortcomings. Rather than taking the log out of their own eyes, they are searching for a speck of dust in the pope’s eyes. Yet here is a man who lives simply and joyfully, a man who lives out the gospel in real tangible ways.

that sets us up as judges. Turn our eyes to you, oh God

9 thoughts on “The Negative Reactions to Pope Francis”